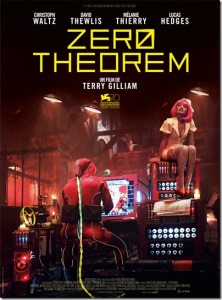 A few weeks ago I watch Terry Gilliam’s latest strange adventure called The Zero Theorem. In it, a sort of hacker, Qohen Leth (which is incidentally strangely close to “Qoheleth,” or Ecclesiates – the “gatherer; teacher or preacher”) is given a problem to solve with a strange computer program. He takes to this new problem by working alone in a massive abandoned church in the city. His goal is to isolate and persist uninterrupted.

But he is interrupted regularly by his supervisor, a virtual call girl, and a whiz kid. He is given the opportunity to experience love and happiness and these moments pop up for him both in the world outside of his cathedral and inside the virtual world of his screen.

Yet Leth persists in his obsession to crack the code of this “zero theorem” which is going to open an opportunity to get a phone call he has been waiting for – a phone call to tell him the meaning of his life.

The search is all he has. And that is the problem.

A life spent searching for meaning is a meaningless life.

This is the fundamental truth of the film. If we spend our days taking quizzes to determine our strengths, personality type, the kind of introvert or extrovert we are, the best career for us, and so forth it is all a search for meaning which is an ultimately meaningless activity. A life of meaning is not one where we seek the meaning of our lives, but one where we do meaningful things with people.

We don’t need to search for meaning in life. A life lived with others is meaningful enough on its own.

Science fiction is a genre of storytelling that has a lot of freedom. By creating totally different worlds than the one in which we live, anything can happen. This is true even of an Earth of the future. This summer has had a fetish with future disaster, dystopia, and end-of-world stories.

This is the End plays with the idea of biblical Armageddon it’s its most crude form. After Earth is a somewhat feeble attempt to play on nature’s adaptation to repel the human organism as if it is a virus. Oblivion is a future where an alien civilization creates human clones to do its own dirty work of sapping the planet’s resources. Pacific Rim works the alien angle where massive beings invade the earth from below and humanity relies on big robots to take care of business.

Then we have World War Z where a worldwide pandemic of “zombies” take over with an infection that takes only 10 seconds to work. They are fast and mean. Each nation has its own strategy for dealing with the situation with the resources it has. For the United States it is the fleet of Navy ships and for Israel it is a massive wall – you know, because the Temple Wall is still standing. Nice metaphor. They tried a wall in Pacific Rim. That failed too.

In Elysium the rich live in a massive spaceship called “Elysium.” The ship is like the one we might have seen in Wall-E where the rich live only to leave the poor Earth in a miserable trash-heap of overpopulated crime. More importantly, the sad and poor people of Earth are the laborers that feed the rich. They actually build the robots that form the very security force that makes all of them a compliant society designed to keep Elysium running. Insulting and cruel right? The people are ridden with disease and illness preventable with medical technology on Elysium as prevalent as home tanning beds. This technology “re-atomizes” cellular structures that can heal cancer and even rebuild a face blown up by a grenade.

In these films there are unfair and unjust social structures where rich are often pitted against poor. There are also themes of environmental catastrophe and the need to act as one human race to solve common problems like disease…or aliens. Both metaphorical and speculative, science fiction projects a humanity that is changed and often it fares the worst due to a series of really bad decisions. Short-term gains are proven to be long-term disasters. Current problems and fissures in the fabric of society are blown-up into hyperbolic grandeur to reveal the problems for the depth they truly are. Sci-fi explores how such big problems just might track in the distant and not-so-distant future. The themes seem obvious for most people.

Well…except for folks like Roger who exercises his freedom only in missing the point:

For World War Z: “The country that does the best is Israel, because it builds walls to keep out the invading zombies.”

For Elysium: “Some have suggested that Elysium is left-wing because of its theme to steal from the rich and give to the poor. Maybe so, but it is also a warning against unrestricted immigration.”

Did I read that correctly? We know Israel’s strategy failed. Did he not see that stack of zombies scale the wall, swarm Jerusalem, and lay waste to the country to in a matter of hours? The rich are viewed as brutal in Elysium. The defense secretary blows up ships of people flying to Elysium to seek medical care. After being exposed to lethal radiation our anti-hero is on a bed receiving pills and news of his fatal condition from a robot. His boss and the CEO (an Elysium resident) stand outside the room. The CEO is more concerned about our hero’s face melting and making a mess of the sheets that he doesn’t want to replace.

Roger and I saw different films. We can point to the tired set-up of the while, male protagonist saving the world…again. But I will leave that for others to dissect.

Which film did you see?