I wasn’t feeling that well. During the unseasonably cool and wet month of June and then into July I managed to binge watch my way through Buffy the Vampire Slayer, Angel, Dollhouse, Season 2 of Agents of S.H.I.E.L.D., and finally Sense8 (oh my God what a great show). I accomplished almost the entire Whedonverse right into Buffy Season 8 in the comics (I almost hit up Firefly, again). My consumption of old TV at the expense of using my mind for constructive things like reading and experiencing sunshine was not out of some healthy compulsion, but in order to fill time. Depression works that way. Depression is persistent giving up. It is a condition of gravity and feels inescapable.

In July I decided I needed to change some things. I needed to change my thinking. But the way the brain reacts to the environment can’t just be wished away. I accepted that wishful thinking was the easy path for people, like me, who didn’t really want to work all that hard. But being different and thinking and behaving differently is not easy. It is hard work. It takes a lot of force to push against instincts that pull you down in self-destructive ways.

I love you Buffy, but our relationship was more dysfunctional than you and Angel. Maybe not as bad as what happened between you and Spike. That was messed up. I knew I could do better than that.

When my brain started in on those depressive thoughts – “It’s pointless,” “You kind of suck,” “There you go failing again” – rather than dwell on the messed up world that my brain lived in, I decided to push back. I started to tell all those thoughts to “Shut the fuck up.” That was a liberating start. But there was this energy left over from the fight and I needed to put it somewhere. 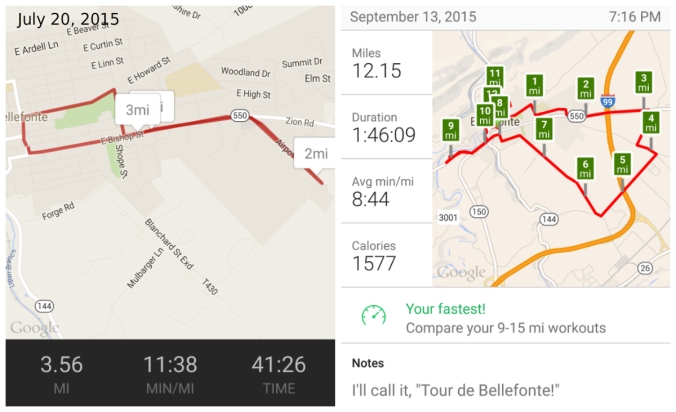 On July 20, 2015 I was eating horribly (I partially blame the deliciousness of the Chinese buffet across the street), gaining weight, in a deteriorating physical condition, tired all day, not sleeping well, and persistently bored. So I took the next step. I put on running shoes and went out to kill myself – metaphorically, of course.

Within a minute of “running” I was out of breath, my legs hurt, and I needed to walk. In that silence, those thoughts began to dig their way out of my brain again (“You idiot,” “What the hell is wrong with you,” “This is stupid,” “Give up already”). I told them where to go and picked up the pace – for another minute. Running for 90 seconds straight that night was an accomplishment and I made it through the entire route. It took me over 40 minutes to make it through just over 3.5 miles. It’s like a fast walk or thereabouts. It was my first victory. I liked the feeling.

Since that night I hurt my knees, I have been sore more often than not, blistered up my feet and came close to losing a toenail, fell pretty hard once, and found myself completely dehydrated one hot afternoon. But every time those voices came into my head, I finished the run and pummeled them into non-existence. With every run it is like a layer of that depressive self gets ripped off and a bit more of who I really am gets to emerge. And I like the running me.

Last Sunday I ran over 12 miles and signed up for a half marathon. I am 20 pounds lighter, sleep like a champ, and have learned that I don’t need to run from depression by bingeing on hours of TV and pounds of popcorn and burritos. I can run right into it and beat it down with each footstep. That’s better medicine than any pharmaceutical can manufacture.

The only way I can change is by sometimes forcing myself to do the things that seem difficult and that I don’t really want to do. I don’t love running. In fact, I hate running during that first mile or two. But that’s when running does its best work. It is during those hard miles that the voices start to speak and I get to attack them. They lose power because I take my power back. My pace always picks up at that point. I don’t think its just because I get warmed up. At that moment I decide who I want to be and the demons of depression lose their grip once again. Right then, I am free.