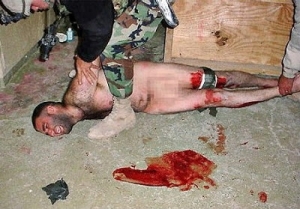 I lived in a place close to “the pile” and saw hundreds of pictures posted all over of missing people. I was angry and wanted to bomb the entire Middle East. But that was raw emotion.

There comes a time when law is necessary even in war. How we handled alleged terrorists in this situation follows the legacy of Truman’s internment camps which are a stain on our country that we just don’t talk about enough. So the law:

The Geneva Convention Relative to the Treatment of Prisoners of War (GPW) 6 Article 17, paragraph 4 provides the general rule for interrogation of prisoners of war:

No physical or mental torture, nor any other form of coercion, may be inflicted on prisoners of war to secure from them information of any kind whatever. Prisoners of war who refuse to answer may not be threatened, insulted, or exposed to unpleasant or disadvantageous treatment of any kind.

These were not isolated incidents as we once thought, just covertly handled. It was mismanaged and the information extracted is highly suspect as to its utility.
Unless it’s acceptable for our troops to short-chained to the floor in awkward positions, forced to mimic sexual acts, have food shoved up their asses, stuffed into hot boxes, and water-boarded, then we just can’t justify the same treatment of our prisoners.